Janus: Then and Now looks at the history of one of Cranbrook’s most prominent churches   Friday, January 11th, 2013   (Reprinted with permission from Jim Cameron)

The United Church of Canada is now entering its 84th year of existence. The Cranbrook United Church building itself is four years younger. As to what actually united to form this congregation requires a look:

In 1925, the Methodist Church united with much of the Presbyterians and most of the Congregational Union and the Association of Local Union Churches to form the United Church of Canada (some did not join due to theological, historical and personal reasons). Take a breath. It’s done.

Cranbrook had both an active Knox Presbyterian and Methodist congregation from the earliest days, each with their own building. The local Methodist Church became the United Church in June 1925. The small wooden church on the northwest corner of 8th Avenue and 1st Street, though charming, was suddenly too small for the united congregation. In May 1927, a vote of 84 yays to four nays elected to build a new church as soon as funds could be raised.

The Methodists wielded a certain amount of power back east, not least due to the subscription of the Eaton, Massey and Ryerson families and Cranbrook moved along similar lines, with many prominent families part of the congregation. Canvassing efforts proved quite successful and by the end of 1927 a total of $10,000 was subscribed.

Fund-raising carried on throughout the following year and by April, 1929, the architectural plans — designed by Henry Morgan Whiddington of Lethbridge, a London-trained practitioner with design leanings towards the Edwardian and Beaux-Arts styles and who resided in Cranbrook from 1928-30 — were presented to the church building committee which approved them. The cost was estimated at close to $30,000 and, with over $12,000 already raised, the congregation elected to move ahead with the project on land purchased the year before.

Sadly, the Great Depression entered the picture and fund-raising slowed considerably. As the building neared completion in the winter of 1930 it was necessary to sell the original Methodist/United Church in order to meet costs. The former church was purchased by private interests and converted to a miniature indoor golf course. The business struck out and was soon replaced by a blacksmith, a garage, then a stage line office and finally demolished in 1972 to make way for a car lot.

Construction of the new church was awarded to the local firm of Sainsbury and Ryan, who had built the Roman Catholic Church two years earlier. 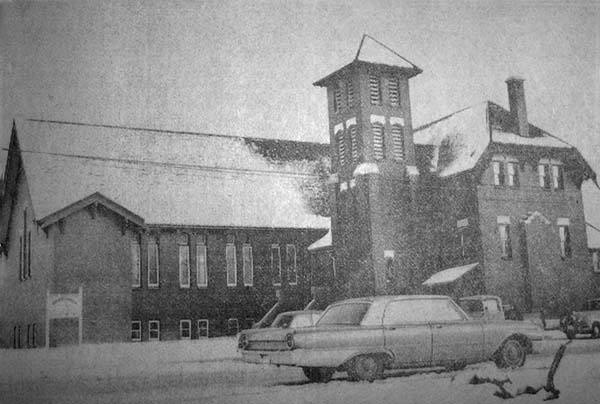 The imposing United Church of Canada was formally opened on Nov. 17, 1929. Built primarily of brick in a modern Gothic style, it featured a main auditorium with a seating capacity of 200 and an adjoining social room connected via folding doors which seated over 200 more. An elevated ladies parlour also served as a stage for the social room when required and an adjoining kitchen completed the main floor. A staircase led over the ladies parlour to an additional class room. The basement included the choir room and vestry, class rooms and a furnace room. The building was heated by two forced air furnaces.

Approximately 900 people attended the two opening services and all welcomed the new building as a notably noble addition to the downtown core and a nice balance to the newly completed brick fire hall on 11th Avenue. That the church was built at all during the opening years of the Great Depression is a testament to the dedication and sacrifice of the congregation. It was the last grand building to be erected in the downtown core for many years and one of the last in which the congregation has remained (the Anglican and Roman Catholic churches being the others).

The structure has undergone two notable changes since its construction: the original bell tower has been raised by an additional storey and, in more recent years, the main entrance area has been enclosed to provide additional space, somewhat obscuring the dominant lines of the bell tower.

Of the three original churches still standing in the downtown core, the United Church of Canada has unarguably seen the most changes in the surrounding landscape, from a fellow compatriot of the old court house to a sentinel of the perfectly-placed Central Park traffic circle to a lone thing of beauty amidst a sea of asphalt and concrete, it remains a much noticed, much loved and, happily, a much used historical component of the downtown core.